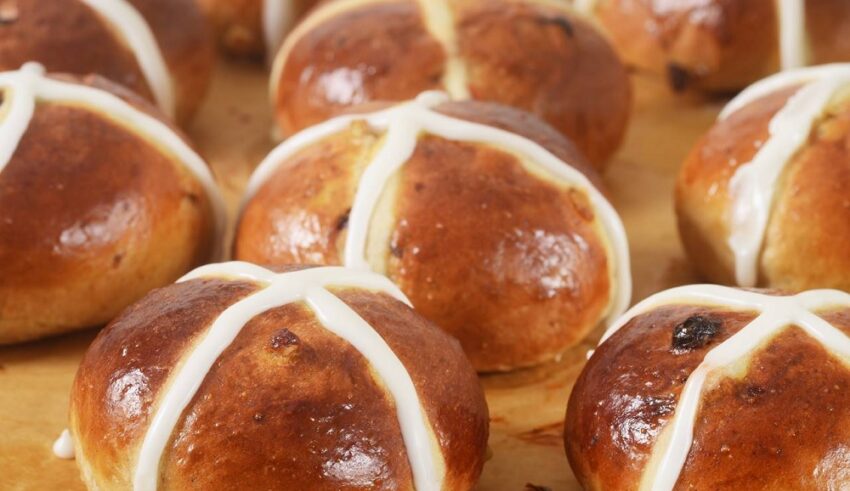 Yes, it is that time of year again!

It is certain to spur a debate amongst those who welcome the early arrival of the delicious treat and those who fume at supermarkets for selling hot cross buns nearly five months ahead of Easter.

Hot cross buns are a traditional Easter treat, but when are they actually supposed to be eaten and sold? Is there an official time frame? And, where did this delicious pastry come from in the first place?

Keep reading to find out more about Hot Cross Buns.

When Should We Eat Hot Cross Buns?

While we see hot cross buns hit supermarket shelves on boxing day, the sweet bun is usually associated with the end of Lent among the Christian faith.

Historically, dairy products were forbidden during Lent and this made hot cross buns a celebrated treat after the 40 days of fasting. There are also many superstitions surrounding hot cross buns including if a bun is shared among two people it can help cement their friendship.

In modern times, even if people don’t celebrate the religious elements of Easter, hot cross buns are something everyone can enjoy along with chocolates and holidays.

The debate over when hot cross buns should be sold is almost as argued as its origins.

There are many stories about where the hot cross bun originated from and some variations of the Easter treat are said to have appeared in ancient Greece during the 6th century.

According to one story, hot cross buns originated in England during the 14th century when an Anglican monk at St Albans Abbey baked buns on Good Friday and distributed them to the poor. The monk, Brother Thomas Rodcliffe, is said to have marked the buns with a cross on top in honour of the crucifixion of Jesus and Easter.

Over time they gained popularity throughout England and became a symbol of the Easter weekend.

Towards the end of the 16th century, a London clerk of markets banned the sale of the buns due to superstitions they carried medicinal or magical properties. Elizabeth I of England passed a law only allowing the sweet buns to be sold for funerals, Christmas and the Friday before Easter.

There are also many superstitious beliefs surrounding hot cross buns. One legend states if you bake the buns on Good Friday and then hang them from the kitchen rafters, you will ward off evil spirits. Doing this is also said to keep the buns fresh throughout the entire year.

What Is A Traditional Hot Cross Bun?

A traditional hot cross bun is a spiced sweet bun stuffed with raisins and currants. Flour paste is used to decorate the bun with a cross, which represents the cross on which Jesus Christ died.

Today, there are many variations of hot cross buns including, caramel, chocolate chip, coffee, fruitless and even Vegemite and cheese.